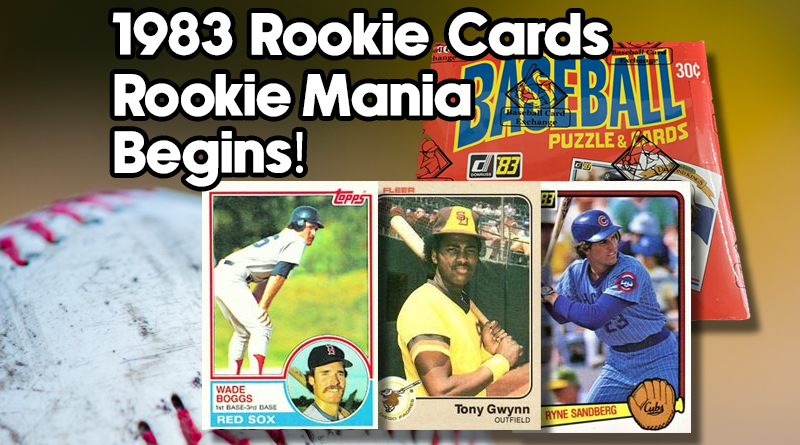 The 1983 rookie cards are what hooked me as a collector. It was a great year for sports card collecting and this is how the Topps, Donruss, and Fleer sets converted a little kid to liked baseball into a life-long card collecting enthusiast.

I was born in 1974 in Tennessee and was raised in a family that loved baseball. My mother, father, and grandfather were all big fans and watched every baseball game that was on TV. They started as Dodger fans, but eventually migrated to Braves and Cubs fans because those were the teams we got to see play on TV. In the early days of cable television there was no ESPN, but the Braves played on TBS and the Cubs played on WGN, and we got those channels. But I didn’t like either of those teams. My older brother Jamie was a Cincinnati Reds fan so I followed suit, even though I didn’t get to see them play that much.

Jamie is eight years older than me and always collected baseball and football cards. I can remember buying some in the early 1980s, but I was mostly on the lookout for players I knew like Pete Rose or Johnny Bench. A baseball card shop had just opened up in my hometown around this time and we would occasionally talk our parents into taking us over there to spend our allowance money. I settled on Dave Concepcion as my favorite player because my brother took the Johnny Bench from the box of 1981 Topps Giant Photo Cards and convinced me Davey was just as good to keep me from crying. It was for the best I suppose. I really couldn’t afford Johnny Bench or Pete Rose cards on my budget. Dave Concepcion was a good combination of great and affordable.

I realized later in life how many cool collectables exist for Dave, but that’s a topic for a different blog.

The first of My 1983 Rookie Cards: Wade Boggs Fleer

In 1983 my card collecting interests changed. I was nine years old and a friend told me to be on the lookout for a player named Wade Boggs. It was his rookie card and it was going to be worth a lot of money because the card shop was already selling it for $1. That was half of my of my allowance and the idea of pulling something worth $1 from a 30 cent pack of cards was amazing. I new old cards got more valuable over time, but this was the first time I saw the opportunity to pull a relatively valuable card from a relatively cheap pack.

I already had a box of cards that was starting to fill up 1983 Topps, Donruss, and Fleer cards. As soon as I got home I searched through all my cards and there it was. A 1983 Fleer Wade Boggs rookie card. Up to this point in my life I had only spent money on cards, but now I had to protect my investment. On my next trip to the card shop I bought a pack of 1983 Topps, a few Dave Concepcion cards, and a couple of plastic sheets to keep my best cards safe. I already had a trapper keeper three-ring binder, so this was the start of my first baseball card album. As fate would have it, I opened the pack of 1983 Topps and the first card was another Wade Boggs rookie.

My eyes were opened to a few other players on that trip to Clinton Cards Comics & Collectables. Wade Boggs was not the only rookie card lurking in the unopened packs. There were two players on the Padres named Tony Gwynn and Alan Wiggins who were already priced at a dollar each. Steve, the owner of the shop, told me there was also a rookie for the Cubs who was going to be very good. His name was Ryne Sandberg. I didn’t have a dollar left to spend, but 60 cents for a 1983 Donruss Ryne Sandberg rookie seemed like a good investment. The money had been earmarked for a Peppermint Patty and Coke, but this was the moment when my cravings for rookies surpassed my craving for sugar. I bought the Sandberg.

A Summer of Hunting 1983 Rookie Cards

Although I occasionally bought cards before this year, 1983 was the year that I became addicted. The gas station within walking distance of my house carried Topps, Donruss, and Fleer packs. This gave me access to cards even when I couldn’t get a ride across town to the card shop. I was always on the lookout for Boggs, Gwynn, Sandberg and Wiggins, but I was also happy to pull older stars from the packs. In addition to Bench and Rose, I loved getting Reggie Jackson, Dale Murphy and Carl Yastrzemski. I also loved the Topps All Star cards and the Super Star Specials from the Fleer set.

Later that summer I learned there were even more rookies I should be on the lookout for. A friend alerted me to the existence of Willie McGee. He had finished 3rd in the 1982 Rookie of the Year voting. I wasn’t sure why he was less popular than some of the other rookies, but I figured he must be worthy of my album. I went though my box of common cards and was delighted to find I had all three versions of his rookie. Then, my brother told me about a player named Ron Kittle. He was on the way to breaking the rookie home run record and somehow I hadn’t heard of him. He was only in the Fleer set, so I focused all the buying power my allowance had until I pulled one from a pack. It took a few weeks, but I got it.

I’m not sure if everyone agrees that 1983 was the start, but rookies exploded in the hobby around this time. The Wade Boggs rookie was hot, but not anything like some of the rookies over the next few years would be. In 1984 Darryl Strawberry and Dwight Gooden cards would soar to new heights. I was awestruck by the $1 price tag on the Tony Gwynn rookie, but just a few years later The 1984 Donruss Don Mattingly rookie and the 1986 Donruss Jose Canseco rookie would both climb to $100. It was an exciting time to be a collector, but it was also sad. For the first time since I became interested in cards some new issue cards were too expensive for me to buy.

It would only get worse. During the mid 1980s card values were soaring based on a few years of success. To demonstrate this point, neither Jose Canseco or Don Mattingly will make the hall of fame as players. But their rookie cards were valued higher than players who were already well on their way like George Brett and Ricky Henderson. By the late 80’s the value was driven purely by speculation. The local shop was selling the 1988 Donruss Greg Jefferies rookie for more than $10 before he had had 10 at bats in the major leagues.

1983 Was My Collecting Golden Year

I’ve been a card collector all of my life. I’ve enjoyed every phase of it. My current phase, where I’m an adult and can afford to buy cards I couldn’t afford as a kid is certainly one of the best. But I owe the best time I’ve ever had collecting to the 1983 rookie cards. It was all there. I was chasing cards, competing with friends, watching my collection grow in value – but it was still a time when kids could spend what little money they have and buy the best available cards of the moment.

Card collecting was on the verge of going from something that was intended for kids and fans to something that would attract investors and speculators who wouldn’t have spent 30 cents for a pack before the possibility of big earnings was there. And that’s OK. All things evolve and the hobby always equalizes at a midway point between earnings for card companies and collectors interests. Kids have always found a place in the hobby to collect and have fun. I wonder if it’s as fun for a 9 year old today as it was for me in 1983.

How the1983 Rookie Cards Fared

During this blog post I’ve mentioned a lot of 1983 rookie cards, and a few others. It’s safe to say none of them are as valuable as collectors from the time hoped they’d be. We didn’t realize it then, but the card companies had already started mass production by this time. Let’s take a look at how some of these cards and players ended up.

Wade Boggs and his 1983 Rookie Cards

Wade Boggs played in the MLB from 1982 to 1999. He ended his career with a .328 batting average and more than 3,000 hits. He was inducted into the MLB Hall of Fame in 2005. His rookie cards are sought after by collectors, but there are a lot of them out there.

Tony Gwynn and his 1983 Rookie Cards

Allan Wiggins and his 1983 Rookie Cards

Alan Wiggins played major league baseball from 1981 to 1987, but he never achieved stardom. He passed away on January 6th, 1991 from AIDs. He contracted the disease from intravenous drug use. His rookie cards are common cards.

Ron Kittle and his 1983 Rookie Card

Ron Kittle was a major leaguer from 1982 to 1991, but his rookie season was the best year of his career. His power numbers dropped and he batted for a low career average. After his rookie year he was not a star player, thus his rookie cards not with much.

Willie McGee and his 1983 Rookie Cards

Willie McGee played in the MLB from 1982 to 1991. He made the All-Star team four times and even won a National League MVP award. Willie came up well short in hall of fame voting, so his rookie cards are not very expensive.

After an incredibly fast start to Dwight Gooden’s career, his success fizzled due to injuries and drug use. He played in the major league from 1984 until 2000 and logged 194 wins. His cars are not terribly expensive because his career didn’t live up to the early expectations, but they do have some value.

Darryl Strawberry played in the major leagues from 1983 to 1999. He was an 8-time All Star, but didn’t achieve the success that was expected of him because of drug use. He did recover and make a comeback to baseball, but ultimately fell short of being a hall of famer. Darryl was a star player and his cards are still somewhat valuable.

Don Mattingly played major league baseball from 1982 to 1995. By 1987 he appeared to be well on his way to the hall of fame, but a back injury took a heavy toll on him. He played for several more years, but never returned to his pre-injury form. Don Mattingly was an extremely popular player and his cards still hold some value even though he was not elected into the hall of fame as a player.

Jose Canseco was a major leaguer from 1985 to 2001 and he ended his career with 462 home runs. Like some of the other players in this article, Jose was a star player who did not have the statistics to justify enshrinement in the hall of fame. He also admitted to steroid use which tarnishes his legacy to the extent that he has virtually no chance to be elected. But, because of the popularity he had as a player his rookie cards are still somewhat valuable. 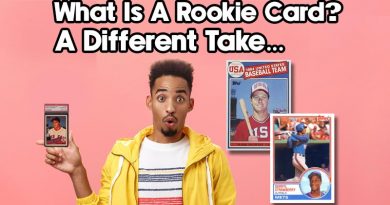