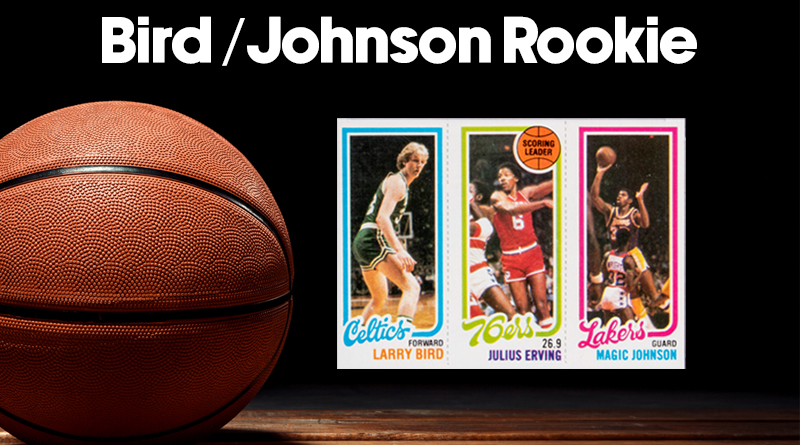 The most famous Larry Bird and Magic Johnson rookie card happens to be the same card from the 1980-81 Topps Basketball set. This is an unusual set where each card has three mini-cards. Bird and Johnson appear together on the most famous rookie card, but they also appear apart on several other cards in this set that are considered rookie cards. In this article, we’ll walk through each rookie card for both NBA legends.

No two basketball players’ careers have been as closely tied to each other as the careers of Larry Bird and Magic Johnson. They battled for the NCAA championship in college, entered the NBA together, competed against each other for several NBA titles, co-captained the Dream Team, and ended up as great friends. So it seems fitting that a bizarre idea from Topps for the 1980-81 basketball set also linked them together in trading card history. Instead of giving each player their card, Topps put three cards, separated by perforations, on a standard-sized card.

As fate would have it (or maybe as Topps planned it) one of the cards had Larry Bird on the left (#34) and Magic Johnson (#139) on the right – separated by a Julius Erving scoring leader card (#174). Both Bird and Johnson also appear on other cards in this set, but those other cards aren’t the main topic of this post, but we will talk about them a little farther down the page.

The 1980-81 Larry Bird and Magic Johnson rookie card is a bit odd, but that doesn’t make it any less iconic. There are only a few rookie cards across all sports that have more than one hall of fame player on it, but this is the only card that has two players who are considered by many to be two of the best five all-time players in the sport. As if having Larry Bird and Magic Johnson wasn’t enough…

There are some other factors that make this card iconic:

1980-81 Topps Basketball cards introduced the concept of three cards in one. For Topps, this was a one-time experiment because they didn’t do it again. Ultimately, it would be a forgettable set if not the several rookie cards for two iconic players: Larry Bird and Magic Johnson. The 264-card set was made up of standard-sized cards that are each separated by perforations into 3 1 1/6″ by 2 1/2″ cards.

Design: The 70s might have ended, but the design of the 1980-81 Topps basketball card set still has a 1970s feel. Each mini card is on a white background and has a brightly colored line connecting to the team name in a matching script. The color of the border and the script seemingly have nothing to do with the actual team colors. The Larry Bird rookie has “Celtics” in a light blue and the Magic Johnson Rookie has “Lakers” in pink. Below the team name is the player’s position and name. The Julius Erving card has a basketball in the top right corner that says “Scoring Leader.”

Shop for the 1981 Topps Larry Bird and Magic Johnson rookie on eBay (affiliate link), because it is the rookie for two of the best basketball players ever.

The back 1980-81 Larry Bird / Magic Johnson rookie is broken up into three mini cards like the font. All three cards have the card number in the upper left corner. The Bird and Johnson cards have the player’s name, height, weight, college, draft, birthday, home, stats for the 1979-80 season. It also includes a highlight and a cartoon “fun fact.” The Julius Erving leader card has a list of 76ers career-scoring leaders. Hal Greer is listed as #1, a ranking he still retains to this day. An interesting footnote is that Magic Johnson’s first name, Erving, does not appear on the card anywhere. Neither does Julius Erving’s nickname, “Dr. J.”

The 1980-81 Larry Bird and Magic Johnson rookie card is one of the most valuable cards made in the 1980s. The chart below was pulled from the popular card grading site PSA on 09/20/2021. It shows prices for the Bird/Johnson rookie card in various conditions.

Keep in mind that prices fluctuate. While PSA is a great way to find out the value of a card, we recommend going to eBay to see what cards are currently selling for on the world’s most popular auction site. Click here to view current auctions for the 1980-81 Topps Larry Bird (#34) and Magic Johnson (#139) rookie card

The 1980-81 Topps Larry Bird (#34) and Magic Johnson (#139) card is the rookie that most people think of when they talk about a Bird or Johnson rookie, but there are several other cards in this set that might be considered rookie cards by some. While it’s important not to confuse the cards and overpay, these other cards do offer an excellent opportunity to buy inexpensive early Bird and Johnson cards. Here are the other cards in the 1980-81 Topps Basketball card set that features Bird or Johnson.

The Magic Johnson card on the right (#139) is the same version as the one on the Bird/Johnson joint rookie. If you can’t afford the version with both, you can pick this one up for a much cheaper price.

Like the card above, the Larry Bird card on the left (#34) is the same version as the one on the Bird/Johnson joint rookie. This card is worth less than the version containing both superstars.

Now that we’ve covered all the 1980-81 Topps basketball cards with “regular” Magic Johnson and Larry Bird cards, let’s cover the rest. There are still 6 more cards that have one of the two great players. Either Larry Bird or Magic Johnson is featured on a “leader” card in the middle position for all six cards. None of them have both Bird and Johnson. Leader cards aren’t universally considered rookies because some people save that designation for the regular issue cards. Still, these are all first-year cards and any of them make a worthy addition to a card collection. And, if you consider them rookie cards that is fine by me.

Erving “Magic” Johnson is regarded as one of the greatest NBA players despite his career being cut short when he tested positive for HIV. He was the reigning MVP when he was forced out of the league. He later came back to co-captain the Dream Team to the 1992 Olympic gold medal.

Larry Bird is regarded as one of the NBA’s greatest all-time players even though his career was cut short with a back injury. He has many great career accomplishments from his playing days and continued his involvement in the NBA as a coach and president of basketball operations for the Indianapolis Pacers.

Do you want to add a 1980-81Topps Larry Bird (#34) and Magic Johnson (#139) rookie to your collection? If so, we recommend starting your search on eBay – the world’s #1 card trading place. Even if you’re not planning to buy one just yet, it’s fun to look at all the great cards currently for sale.

Amazon.com is the world’s largest eCommerce marketplace. They have Bird and Magic books, memorabilia, and so much more. See what you can find today.

Amazon.com is the world largest ecommerce market place. They have Bird and Magic books, memorabilia, and so much more. See what you can find today. 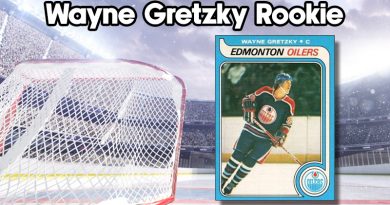 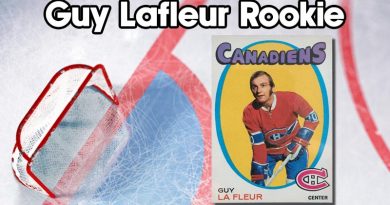 The Guy Lafleur Rookie Cards and Other Vintage Cards 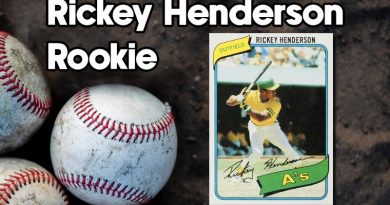